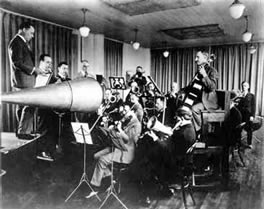 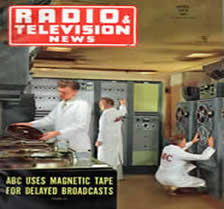 “Electrical Recording” came into practice about 1925 and provided a decent platform for studio recording and distribution.  It would be a few years before a practical version could be taken into the field.  The idea of radio-program recording for program distribution was anathema to the networks who feared recordings shipped by mail would do an end-run around wire-based transmission (i.e. the existing networks).  Yet something had to be devised to delay programs for later rebroadcast and to get programming to those stations not connected to a network.  Early radio-recording technology was similar to that used by the music industry, but then record-cutters were adapted for long-form recording (slower speed; bigger platters: the venerable “ET”).  But the quality was constricted by the performance of the disc system. Recording-quality improvements followed the introduction of the tape machine and tape was first used for program-enhancement purposes in the later 1940’s.

It’s all laid out in the pages below…in no particular order at the moment.  And there’s more at this page.  Enjoy!

This material is provided for use by Educators and Researchers.

No copyrights or usage rights are implied or granted.